Wireless Alarm System PIR Detector’s latest technology now allows you to receive intruder notifications by SMS or voice recording! The all-new intruder alert system is already being used by security companies to alert their clients of a possible intrusion. No monthly subscriptions, no big intrusion surprises this hi-tech yet simple.

To install system complements your existing alarm or works as one standalone alarm. Its uses are countless if something gets opened or if someone intrudes upon the secured area. Then you automatically receive an intruder alert SMS or voice alert on your cell phone. Max 6 numbers it works like a cell phone which automatically calls you or SMS you when it is activated. 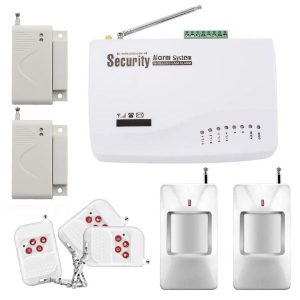 – Being wireless the system can be taken anywhere, can be used in your home when you’re on holiday, or be used at your office or warehouse to detect a break in’s widely used for businesses and stock rooms, safes and strong rooms, shops, kiosks, supermarkets, to detect burglars before they ransack and damage property and theft.

You can load commands into the main unit and up TP 6 prefix numbers. Which would send you the intruder alert SMS or voice call when a break-in occurs. You can also arm and disarm your Alarm System PIR Detector from your cell phone. Have a two-way speakerphone on the loudspeaker and listen in on the intruder. Setup takes 5 minutes and that’s it. you’re secured