The magnetic contacts can be used wherever required for controlling the status of doors, windows, and/or other movable elements, e.g. for protection or monitoring of access to particular sites, spaces, facilities, in automatic control systems, etc.

Magnetic sensors use a sensitive reed switch that is triggered when the magnet is moved close or away from the reed.

Surface mount door window sensors are the most popular sensors as they are simply attached to the door or window.  They are particularly popular for newer doors and windows where a recessed sensor may void a warranty.

Recessed sensors or flush mount sensors are harder to install as they must be drilled right into the door or window and frame, but as a result, they tend to disappear.  They make for a much more attractive installation and it’s less obvious that a sensor is in place.

Overhead door contacts are for garage doors and overhead rolling doors in-home or commercial applications.  They tend to be larger with a wider operating gap and often have armored cable to protect the wiring.

High Security or Balanced Magnetic contacts are for higher security applications where there is concern the sensor may be tampered with.  They are much more expensive and tend to be used in banks or for safes or vaults. 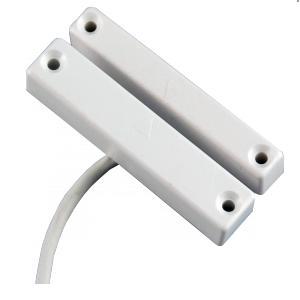 Does not need to be on the same level as the sensor as all my windows are designed to so that the sensor is a 1/4 inch above the top of the magnet and works great. I use three of these on my windows and sliding glass doors which are double-hung.

The reason for three two in parallel then in series with the third is so in the fall and early spring, (I live in Florida), I can partially open the lower window and still have my alarm active. Same for Patio sliding doors as I have inserted a doggie door panel 16 inches wide into the track when we are not traveling.

This enables me to have the alarm active with the leading door in two different positions. I always remove the panel when we travel so it is nice to not have to mess with moving the magnets. Be sure to wire them in parallel so if either one is activated by the magnet the alarm system will detect the door is in the proper position for security.

The switches are sensitive enough and the magnets are powerful enough that they work fine even without shimming everything to get perfect switch /magnet alignment. Each switch even came with double-sided tape and mounting screws so you have a choice of how you can mount them.

About Normally Closed and Normally Open

Door and window contacts are important for any security system. Wired contacts are easy to use with any hardwired security panel.

They can also interface with wireless security systems if a wired to wireless converter is used. Purchase your wired door and window contacts from the Alarm Grid website.

Door and window contacts are some of the most essential sensors used with a security setup. These devices let the system know when a door or window has been opened. Since most break-ins occur through a door or window, these sensors are very important for letting you know about any potential intruders.

You can program your door and window contacts to perform a predetermined response whenever they are activated. These responses can range from requiring a system disarm to immediately sending a distress signal to the central station.

The majority of door and window contacts operate in a very similar manner. These sensors typically include a sensor and a magnet. The sensor is generally installed on or inside the frame of the door or window, and the magnet is installed on or inside the door or window itself. The magnet should be placed within about half an inch of the sensor to prevent any false alarms from occurring.

When the door or window is opened, the magnet will pull away and separate from the sensor. This will cause a reed switch inside the sensor to activate. When this happens, the sensor will transmit a signal to the panel to let it know of the situation. From there, the programmed response will occur.

Hardwired door and window contacts are usually more difficult to install than wireless contacts. This is because a wire will need to be run from the sensor to the security system. That said, there are some advantages to using wired contacts. One consideration is that wired contacts will never require any battery replacements while they are in use.

Alarm Grid offers many great wired door and window contacts. The selection can seem a little overwhelming to new customers. If you need any help choosing a door and window contact, then our support team is happy to help you choose the perfect device. We are available both over the phone and online through chat.

As the name implies, a door and window sensor is used to watch the door or a window and let an alarm system know when it has been opened. These devices are sometimes referred to as “magnetic contacts” because of the way that they operate.

While not every door and window sensor functions, in the same manner, the majority of these devices operate using the same principles.

On the Magnetic Contacts

For best results, the magnet should be placed within about a half-inch of the sensor. When the door or window is opened, the magnet will separate from the sensor.

Once this happens, the sensor’s internal reed switch will activate. In the case of a wireless zone, this will tell the sensor to send an alert to the alarm system to let it know that the door or window has been opened. In the event of a wired zone, this process will actually open a wired circuit which indicates to the system the door or window has been opened.

The system will then perform a predetermined action based on the programming settings for the sensor. So as long the sensor remains in contact with its magnet, the device won’t send an alert to the alarm system.

Be the first to review “Magnetic Contacts 2022” Cancel reply